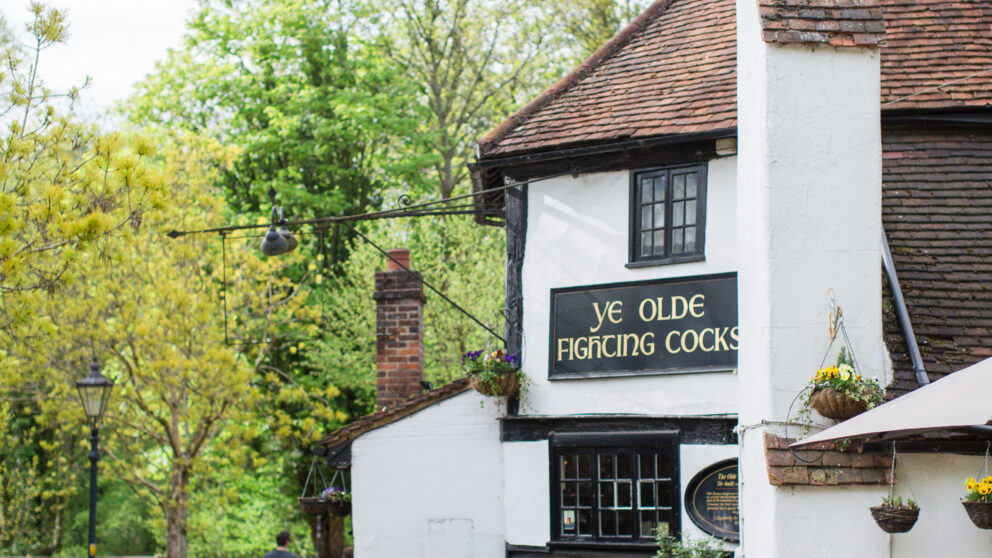 Ye Olde Fighting Cocks is the Oldest Pub in England that prides itself on being a picturesque building and a part of history, that serves award winning food and drinks, all with a smile!

Ye Olde Fighting Cocks dates back to the 8th century. The pub you can see today was built in the 11th century. St Albans Cathedral and grounds are just across the road and there are tunnels stretching from the beer cellar to the Cathedral, apparently used by Monks. Cock fighting took place in the main bar in the late 19th and early 20th centuries, hence the name of the pub. With its long history ‘The Cocks’ could tell a few stories!

It is reputed that Oliver Cromwell, subsequently Lord Protector from 1653 until his death in 1658, slept at the inn for one night during the Civil War of 1642-1651.

The main structure is free-standing and has an octagonal appearance, attributable to its earliest use as a pigeon house. It has been added to over the years but the original timber-framed structure is clearly visible.

The octagonal half-timbered structure was once a medieval dovecote. You will notice that as with many old buildings the inn has quite low ceilings as well as intriguing nooks and crannies. There is an original bread oven next to the main fireplace.

It was originally located close to St Albans Cathedral (when it was St Albans Abbey) and was moved to the present site after the dissolution of the Abbey in 1539.

Its foundations incorporating part of the Palace of Offa, King of the Mercians and dating from around 793. The pub you can see today was built in the 11th century, originally on these early Saxon ecclesiastical foundations near St Albans Abbey and moved to its present site after the dissolution of the Abbey in 1539.

It is reputed that there are tunnels stretching from the beer cellar to the Abbey, apparently frequented by the monks of that time. Cock fighting was a national pastime in England for 600 years from the reign of Henry the Second up to and through the reigns of the three Georges and it is thought that the Cock Pit – about 8ft wide and 10ft long – was brought down from the Abbey when the original name ‘The Round House’ was changed to ‘Ye Olde Fighting Cocks’ until cock fighting as a sport was banned in 1849, when the pub name was changed to ‘The Fisherman’. However it has been known officially as ‘Ye Olde Fighting Cocks’ since 1872.